NMR Assignment of Neomycin and Differentiation of the Neomycin B and C forms.

As all family members of Neomycin, this molecule is chemically composed of a cyclohexane, which is linked to a pyran ring and a furan ring by the anomeric hydroxyl, and in turn, the furan ring is linked to the anomeric hydroxyl of the pyran ring. PA does not have a defined NMR assignment or x-ray structure. But, REID & GAJJAR (1987) have published an assignment for Neomycin B, a molecule very similar to PA.

Due to the pharmacological potential, this study aims to use 1H and 13C 1-D and 2-D techniques of Nuclear Magnetic Resonance spectroscopy (NMR) for the complete assignment of Neomycin, in an attempt to perform a 3D structure elucidation in the end, differentiating the axial and equatorial of the proton position at furan ring, which is responsible for the differentiation of the B and C form of Neomycin. Our assignment of Neomycin B will be assisted by a revisited assignment published in the literature in 1987. We have decided to revisit that assignment because of bogus carbon assignments in the original publication. Following the assignment we can do the determination of the stereochemistry using Residual Dipolar Couplings (RDCs), in which case we use gelatin samples (stretched and unstretched) and different methods of interpretation [4,5].

The proton spectrum show intense overlap and all carbons can be distinguished nicely in the carbon spectrum, but both spectra showed very close chemical shifts specially in the region where are the furan rings. However, we can obtain the complete assignment through of the experiments as CLIP-HSQC, P.E-HSQC, HSQC-TOCSY, NOESY and ROESY. All HSQC experiments, confirm the 1JC,H correlation, moreover the PE-HQSC inform the geminal coupling (2JH,H) and HQSC-TOCSY tell us the distances between protons (nJH,H) through bond connectivity, and then we can observe the crosspeaks based on spin systems for each ring. In the NOESY experiment we obtained the NOE distances between the protons through space, but we also need the ROESY experiment because the crosspeaks are not clear for the ring that we have interest. 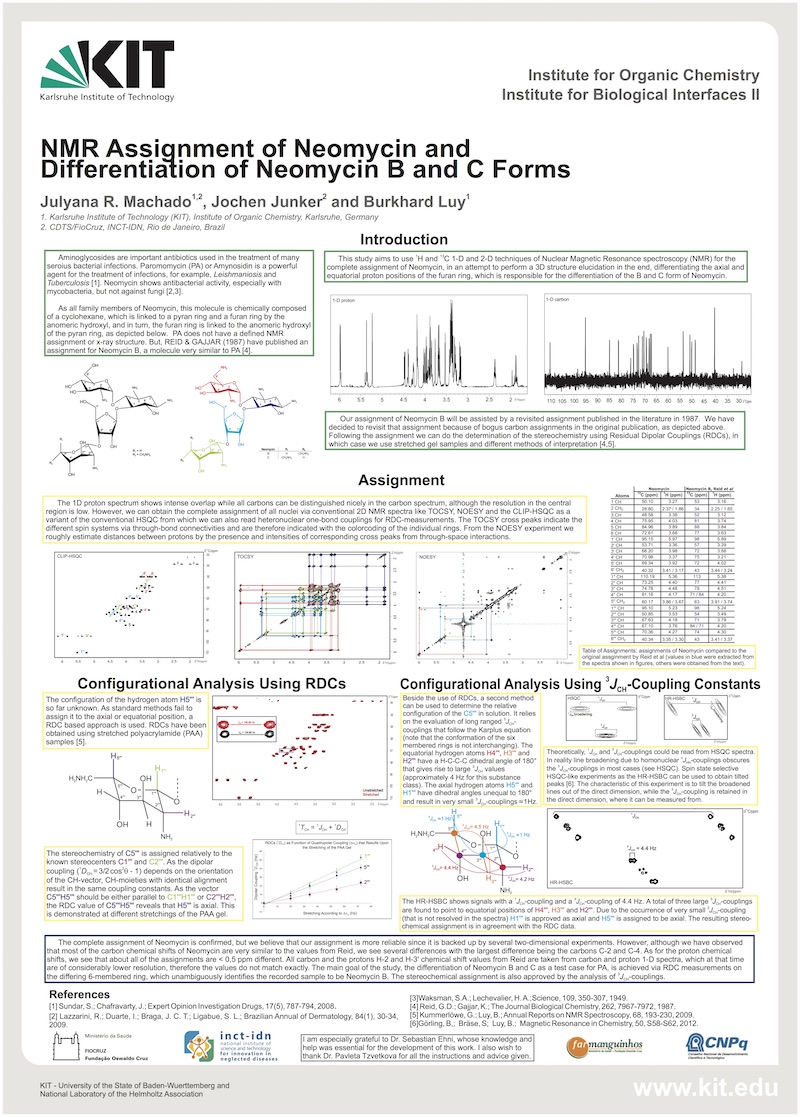